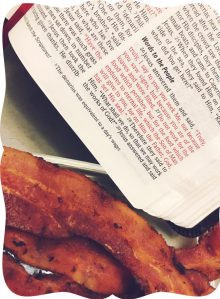 Bacon is the duct tape for food as the Bible is for life.

There are many pastors and preachers that come up with those quick short phrases that stick. I wish I was one of those! I will have that moment when something comes to mind and I have that brief moment of: “Man that sounds awesome!” Then reality hits and I look at debunking it all together and justifying how it doesn’t work. Anyone else like that? No? No, just me? Oh well!

We are studying the book of Daniel in our midweek Bible study (in person and streamed live here!). Daniel is one of the prophets. He was esteemed as being close to God and having that direct line of communication and unbreakable bond of faith. It was that bond that saved him from being beheaded (Chapter 2) and keeping the mouths of lions shut (Chapter 6). As I was walking and praying for our weekly walks, I was thinking about the Daniel experience of interpreting dreams and in the lions den and interpreting a dream that save countless lives. I started thinking how awesome it would be to experience or just have a front row seat to the experiences Daniel had. He was a slave in a foreign land, was important to four very different kings and saw the impossible play out right in front of his eyes.

This week, we looked at the last part of chapter 9. The angel Gabriel flies in, interrupts Daniel in prayer and gives him an explanation of a vision. Here is the thing: Daniel never asked for it. He was deep in prayer all day long. Not over a dream but over the sins of his people. He was interceding on their behalf and including himself as part of the nation that had literally turned their backs on God. No mention of a dream. He was so close to God that God gave him an explanation of things to happen in the very distant future because of the relationship God had with Daniel. Maybe we shouldn’t look for the Daniel experience but to experience the relationship Daniel had with Abba. Instead of looking for Daniel’s experience, how about we look to experience God as Daniel did? If it is the latter, then we must be a prayer warrior like he was. We need to clear time off our busy schedules (let’s face it , he was important to not one but 4 different kings that demanded all of his time – we cannot use the excuse we do not have time between t-ball, soccer, dance and cheer!) and pray with the same intensity and preparation Daniel did. His preparation can be found in chapter 9, verse 3. The intensity was so strong it lasted all day (time of the evening sacrifice) and only could be interrupted by a flying angel (rarely happens in the bible – they have wings but not often are the noted as flying)! Daniel was a man of constant prayer (6:10). Are we a people of constant prayer? Do we prepare ourselves as he did with fasting, and positioning ourselves toward the God we serve? Or do we just want to experience the results of that relationship without the discipline it takes to build that relationship?